Michigan City High School Alum Michael Miller announced on his personal twitter account today that he has is going to play Division 1 basketball next year for the University of North Texas out of Denton Texas, a suburb of Dallas.  Miller graduated in the Class of 2015 from Michigan City High School, and makes it 4 straight graduating classes to generate a division 1 NCAA basketball player from the Wolves basketball program.  Miller represents the Class of 2015, Keenan Simmons the Class of 2014 (playing at Southern Illinois Edwardsville), Ryan Taylor the class of 2013 (Ohio U, and then Evansville most recently), and Jabbar Washington class of 2012 (Charleston Southern).

Mike Miller becomes the 11th player to either be signed with, or playing at a NCAA Division 1 school currently, who attended Michigan City High School.

Miller played the last two years at Shawnee Community College leading them to a 19-10 record in this his Sophomore season.  Mike led his squad with 14.3 points per game, ranked 2nd with 1.4 steals and 3.6 assists, plus third with 6 rebounds per game.  At 6’3″ he was also 2nd on the team in blocked shots per game. 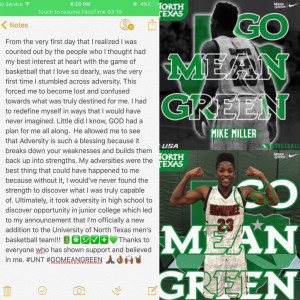